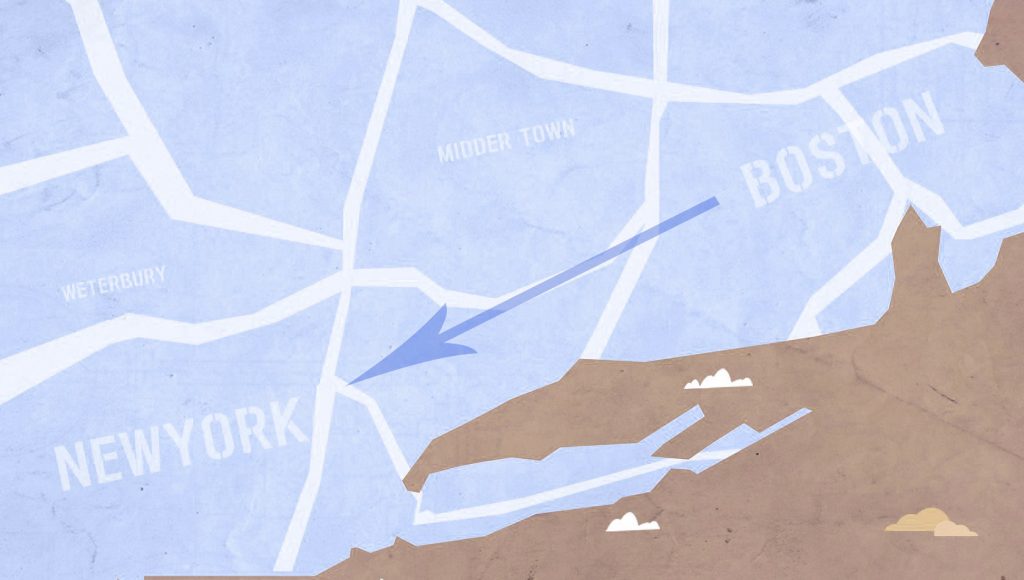 Are you ready to leave Boston and make the move to the Big Apple? If you’re still hesitant, don’t freak out just yet! We know exactly how to prepare you — no matter the reason for your move. Just check out these 11 Things You Need To Know Before Moving From Boston To New York!

Nobody really understands how big New York is until they have to get to the other side of the city in less than an hour. When you are deciding where to live, it’s best to choose a place near an express train. Areas that may seem farther, may actually be the faster route. And be aware that Ubers and Lyfts are going to be a lot pricier for shorter distances than in Boston. But these are the sacrifices we make to live in the city that never sleeps!

Unless you can pay a year’s worth of rent in advance, getting an apartment in New York is almost impossible without a job. So make sure you have something lined up before making your move. And if you’re having trouble with your job search, it may be because a lot of companies in New York ignore resumes if they are out of state. So, if you know any locals, ask them if you could use their address on your resume to increase your chances of getting noticed, getting a job, and making your move to the Big Apple!

Even if you’re okay with roughing it out and spending most of your income on rent, legally New York won’t allow it. If you’re still looking for places to live, make sure that your income is at least 40 times the monthly rent. Not to mention that apartments fill up quickly, so when you find one you like, don’t hesitate and make sure you have all the necessary documents for a smoother process.

You may have grown up thinking by 30 you’ll be living by yourself in your brand new spacious home, but in New York, having roommates in a studio apartment is a more realistic dream. It doesn’t mean you’re a loser, it just means you live in New York. It’s pretty much the norm and nobody would blame you for saving your money. Even people who can afford to live alone choose to have roommates so they can live in a more luxurious apartment!

If you’re ever in need of something at any hour of the day, look for a bodega. Luckily, they aren’t hard to find. These independent delis can be found on almost every block. Food…medicine…toiletries…you name it, a bodega will have it. Next thing you know, you’ll find your favorite bodega and find yourself competing with friends on who knows the best one!

They may seem similar, but Boston and New York have drastically different cultures. And the longer you stay, the more you’ll notice the differences. If you’ve been in Boston for a while, you know that it feels more like a large town than a big city. New York, on the other hand, will never be mistaken for a town and gives off a much freer vibe. Don’t get us wrong, we love the feeling of closeness in Boston, but be prepared for all the different things New York has to throw at you.

Since most people who live in New York weren’t born there, it’s not hard to find a sports bar for every fan! If you’re on the search for a place to watch the Red Sox or Patriots game, you won’t be searching for long. And don’t be surprised if you run into some fellow fans along the way!

Last call at 1:45 am? Not in New York! You can drink beer and take shots of whiskey until 4 am in this city. Which also means that nightlife starts later too. No more having to worry about having to rush out of work to get ready for your night out. But make sure you can handle waking up the next morning!

Don’t worry about having to time your night out based on when the last train runs. In New York, you can stay out at all hours of the night and be assured that there will be a subway at your service to get you home. They may not run as frequently at later hours, but you definitely won’t be stranded.

Yes, happy hour is a thing. And almost every bar you come across in New York will have happy hour specials for you to enjoy! This might not seem normal to someone who’s been living in Boston because Massachusetts has a law against happy hour special. But you definitely won’t be lacking them in New York!

People in New York find an excuse to dress up for any occasion. Even going to the grocery store is treated like a red carpet event. With access to fashion-forward stores, it comes at no surprise. New York is a place that allows everyone to express their style in the most grandiose ways!

Now that you know the ins and outs of New York, you should be more than prepared if you decide to make the move. We understand that moving from Boston to New York is going to require a bit of adjusting, but we have no doubt that you’ll have a great time in this wondrous city! So, are you ready?